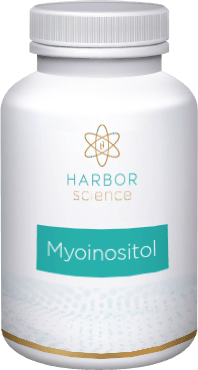 Myoinositol is a natural supplement found to be useful in PCOS as an insulin sensitizer.1,11,27,28

HOW IS MYOINOSITOL SUPPLED?

HOW DOES MYOINOSITOL WORK IN THE HIUMAN BODY?

Supplementation with inositols, both myo-inositol (MI) and D-chiroinositol (DCI), a natural insulin sensitizer, in women with PCOS has been evaluated over the last decade2,3. Inositols are incorporated into cell membranes as phosphatidyl-MI, which is a precursor of inositol triphosphate (InsP3). They act as an intracellular second messenger and regulate several hormones such as thyroid-stimulating hormone (TSH), follicle stimulating hormone (FSH), and insulin4.

Myoinositol Myoinositol is the most abundant form of inositol in humans. Epimerase, an insulin-dependent enzyme, converts MI into DCI, depending on the specific needs of the tissue for these two molecules5. Myo-inositol is not only a prominent component of membrane-incorporated phosphatidylinositol, but participates with its isomers to a multitude of cellular processes, including ion channel permeability, metabolic homeostasis, mRNA export and translation, cytoskeleton remodeling, stress response6. The role of inositols in women with PCOS can be attributed to deficiency of inositols, which are mediators of insulin activity7. It is well established that different tissues have different ratios of MI/DCI and, in the case of PCOS patients, the conversion is impaired due to insulin-resistance (IR)8. It is reported that the inositols can reduce insulin resistance, improve ovarian function, and reduce androgen levels, thus enhancing the reproductive impairments associated with PCOS9,10. Moreover, the administration of MI is a safe and effective method to prevent and correct metabolic disorders in teenagers affected by PCOS with cutaneous disorders11.

L-tyrosine is a nonessential amino acid synthesized in the body from phenylalanine. L-tyrosine is found in many dietary sources, including lean proteins such as chicken, eggs, fish and whole grain oats, and dairy products including milk, cheese, and yoghurt. L-tyrosine is the precursor of thyroid hormones and many other neurotransmitters like adrenaline, noradrenaline, serotonin, and dopamine. It also helps in the production of melanin and in the function of organs in the body responsible for making and regulating hormones, including the adrenal, thyroid, and pituitary glands12. All these hormones regulate mood, therefore L-tyrosine is claimed to act as an effective antidepressant13.

Tyrosine kinase signaling pathways are integral parts of the mammalian ovulatory process but do not involve actions on the synthesis of steroids, plasminogen activator or prostaglandins14. The study conducted on the old female rats has shown that when they were given L-tyrosine they would have had their regular menstrual cycle and ovulation15

As L-tyrosine binds to free radicals, that can potentially cause damage to the cells and tissues, it is considered to work as a mild antioxidant. Findings from a range of clinical studies using allergy vaccines containing L-tyrosine showed the lack of toxicity seen in animal studies and they have showed evidence of enhanced immunostimulatory activity.

The absence of toxicological concerns in these findings supports the hypothesis that L-tyrosine is a safe adjuvant for human use16. In the United States L-tyrosine is Generally Recognized as Safe (GRAS). The Food and Nutrition Board of the Institute of Medicine reports that for every 1 g of protein in the diet, the body needs 47 mcg of tyrosine. Based on these recommendations, women need to intake 46 g of proteins; therefore, they need 2.2 g of tyrosine daily17. No exact dietary supplement recommendation for tyrosine exists. It just depends on diet, overall health, and what are the symptoms the patients are dealing with.

Selenium (Se) is a trace element that is naturally presented in many foods, like organic lean meat, fish, Brazil nuts, cheese, eggs, nutritional yeast, liver, butter, cold water fish, alliums, mushrooms, tomatoes, green vegetables18. Selenium, which is nutritionally essential for humans, plays a critical role in reproduction, DNA synthesis, protection from oxidative damage, and infection19. It is crucial for the several enzymes involved in thyroid function. What is more, it has been found that selenium diminishes thyroid autoantibody levels20. Selenium supplementation among PCOS women resulted in beneficial effects on reproductive outcomes21. The RDA for women is 55 mcg that rise in case of pregnancy to 60 mcg.

Chromium Picolinate (CrPic) is a widely used nutritional supplement for optimal insulin function22. Apparently, it has a role in maintaining proper carbohydrate and lipid metabolism in mammals23. As this role probably involves potentiation of insulin signaling, chromium dietary supplementation has been postulated to potentially have effects on body composition, including reducing fat mass and increasing lean body mass, especially in women with PCOS24.

WHAT CONDITIONS HAS MYOINOSITIOL BEEN USED FOR?

The synergistic action of myoinositol, L-tyrosine, selenium, and chromium has been clinically studied for menstrual cycle re-initiation and ovulation, improvement of hyperandrogenism, and improvement of BMI in PCOS patients.1,11,27,28

WHAT ARE THE RESULTS OF THE CLINICAL STUDIES?
Infertility

One study11 involved 25 participants with PCOS and issues with infertility. Of the 25 participants, 88 percent had restored menstrual cycles, 72 percent achieved normal ovulation, and 40 percent actually became pregnant after treatment with Myo-inositol combined with folic acid for six months.

In a controlled clinical study performed in 2013,27 50 overweight patients with PCOS underwent a hormonal evaluation and glucose tolerance test before 12 weeks of therapy and then again after treatment with Myo-inositol and folic acid. In all patients, insulin and testosterone levels were reduced after treatment and menstrual cycles were restored.

A comparative study published in 201728 found that a combination of myoinositol and folic acid seemed to be as effective for PCOS as treatment with metformin. In that particular comparative study, both groups had similar beneficial outcomes: serum progesterone levels dropped, pregnancy rates increased, and menstrual cycle disorders seemed to stabilize. It is worth noting that even though both metformin and myoinositol may have similar efficacy, myoinositol is considered to be related to far fewer and far less worrisome side effects.

One hundred and eighty-six women, with a PCOS diagnosis, were divided in four groups according to their clinical features.1

All patients were given a compound with 2 g myo-inositol, 0.5mg of L-Tyrosine, 0.2mg of folic acid, 55 mcg of selenium and 40 mcg of chromium daily for 6 months. Hormonal assessment, BMI, Ferriman-Gallway Gallway score, HOMA index, and follicular monitoring were reported before starting the therapy, three months and six months after.

WHAT IS THE DOSAGE OF MYOINOSITOL AND HOW SHOULD BE USED?

Myoinositol - 2 g myo-inositol, 0.5 mg L-tyrosine, 0.2 mg folic acid, 55 mcg selenium, and 40 mcg chromium was studied as a once daily treatment over a 6 month period for symptomology of PCOS.1

WHAT SIDE EFFECTS MAY BE CAUSED BY MYOINOSITOL?

In the clinical studies of the combination supplement, side effects reported were gastrointestinal symptoms, such as nausea, heartburn, but are rare.

Based on individual ingredients, other side effects can include tiredness, headache, dizziness in some people; blood clotting problems, muscle tenderness, mood changes

WILL MYOINOSITOL INTERACT WITH OTHER DRUGS, AND IF SO HOW?

Inositol: no information for drug interactions with inositol

IS MYOINOSITOL SAFE DURING BREASTFEEDING AND CAN IT BE USED IN CHILDREN?
Pregnancy

Inositol is generally regarded as safe and can be used in pregnancy.25

Safety and effectiveness have not been established in this population and should be avoided.

Safety and effectiveness have not been established in pediatric patients and should be avoided.

The medical information on this prescriber’s guide is not intended to be a substitute for professional medical advice, diagnosis, or treatment. Always seek the advice of your physician or other qualified health provider with any questions you may have regarding a medical condition. Never disregard professional medical advice or delay seeking it because of something you have read on this prescriber’s guide.

If you think you may have a medical emergency, call your doctor, go to the emergency department, or call 911 immediately. Harbor Compounding Pharmacy does not recommend or endorse any specific tests, physicians, products, procedures, opinions, or other information that may be mentioned on any of our content.